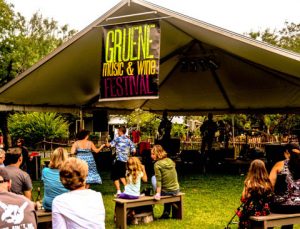 The Gruene Music & Wine Fest began as a one day event in 1986 with the purpose of promoting Texas and Americana music in a fun and relaxed setting while raising funds for the United Way of Comal County. Over the years, it has become a four day celebration not only of Texas and Americana music, but also a celebration of wine, craft beer, food and gift items handmade in the Lone Star state.

The event continues to grow each year. In recent years, we have been able to expand the “Texas Tastings & Tunes” event on Saturday to include over 40 wine & food producers for tastings and ‘Le Cordon Gruene’ food alley. To further enhance Sunday’s event, we’ve added a Craft Beer Tasting, a second stage and the big game on a big screen TV. A Craft Market has also been added to both Saturday and Sunday events.

Although the event itself has evolved through the years, our benefiting charity has always included and primarily been the local United Way, a charity whose mission is to improve the quality of life for people in Comal County by generating resources to meet the needs of the community.

In 1986, a mere $450 was raised for United Way, but as the event has grown, so too have the funds given. We now raise nearly 500 times that amount and have been able to double our funds raised just in the past eight years. 2017 marked a record-breaking sum of $173,945.98, of which $143,741.12 of the proceeds from events held Thursday, October 5th through Saturday, October 7th were donated to the local United Way of Comal County, while the remaining $30,204.86 of proceeds from Sunday, October 8th‘s event were donated to United Way of the Coastal Bend to aid in Harvey disaster relief.